I’ve been rooting around in my old blog files—especially the ones from October of 2008, when I was glued to the Presidential debates and surfing a fine emotional edge: Would Americans bitterly disappoint me by stealth-voting, at the last minute, for Geezer McCain and his no-account Veep?

Immediately following the 2008 election, I wrote a blog called ‘The Audacity of Pie’ which urged people to relax, celebrate and give thanks. There would be plenty of time to choose exactly the right Secretary of Education and devise plans to revitalize public education. Because everything was different, now.

And that was an election where pretty much everyone and everything I voted for won.

Fast-forward ten years, to a point where the late, lamented John McCain is regarded as a great statesman, compared to his fellow Republican senators. And just about everyone I know is biting their nails as they drive to the next candidate forum, canvass training or fundraiser.

So yeah—hope and change can be pretty ephemeral.

My friend Sabrina Joy Stevens posted this on her Facebook page yesterday:

I am very worried about people tying their emotional well-being and sense of empowerment to the outcomes of elections.

Bingo.  The rich thread that followed was a reflection on all the weariness, heartache and righteous anger this election has generated: Older folks remembering the ebullience of other, long-forgotten political victories that ultimately did not yield Woodstock Nation. A present-day acknowledgement that it’s not just about winning elections—lives and livelihoods are at stake. Potentially frightening after-effects of a Democratic triumph. Reminders to breathe.

Are we exhausting ourselves—mailing postcards, knocking doors, phone-banking, watching the same hideous stories on MSNBC, wondering how it could get any worse—only to find that whatever happens on Tuesday night is anti-climactic, at best?

Wisdom from Sabrina: Voting is nowhere near the *only* way we build or exert power, many people have been systematically barred from doing even that bare minimum, and people believing that “your vote is your [only] voice” is a key reason why we’re in this mess in the first place.

When the Blue Wave or Blue Trickle occurs, it is only the first step in a long, long march. This can’t be turned around in two years, or four. Anyone who studies political movements knows that it can take decades or centuries to permanently move the needle, change hearts and minds, turn the great ship, choose your metaphor.

And just when things seem to be coming right, the arc of justice bending, slightly, in the right direction, all of your earnest organizing, your rosy vision, goes to smash.

I don’t ever want to wake up to a morning like November 9, 2016 again. But I’m old enough to know that I might. Money talks, and it doesn’t often speak from the perspective of integrity or equity. We’re a self-loving, wealth-loving rugged-individualist kind of nation, in spite of our uniquely democratic origins and our rhetoric.

We are not trained, in school, as other cultures are, to be part of a coherent community, to wait for the last person to cross the finish line. We value and recognize champions, and are willing to overlook the cheating and inequity it takes to make certain people perpetual winners. No matter who’s in the White House or calling the shots in Congress or the Supreme Court, this is who we seem to be.

It’s going to take a lot more than an election to change that. The difference between 2008 and 2016 campaigns should be overwhelming proof of our muddled, even corrupt, national values. 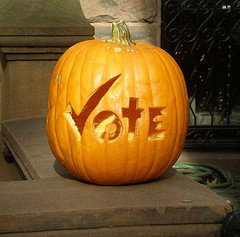 I feel no guilt or regret about occasionally taking a mental health break from the elect-good-candidates grind. Even laughing, sometimes. But where I draw my real strength is from community. That’s been the best part of the past two years: identifying people who are as appalled as I am by what’s happened to democracy.

I have learned so much from people—old friends and new—in this two-year cycle. From the women I met, briefly, at rest stops on the Pennsylvania Turnpike, en route to Washington D.C. for the Women’s March. From the Indivisible group that sprang up in my county. From women who never dreamed they’d run for office, but somehow are standing for election on Tuesday.

That’s something we can feel good about—no matter how the voting comes out. That’s the real foundation of change—people.