Now that I’m not in the classroom every day, I occasionally have breakfast with a group of retired band directors who live in Northern Michigan and meet monthly to reminisce about the good old days in public school music education. Here we are, in September. Notice anything? 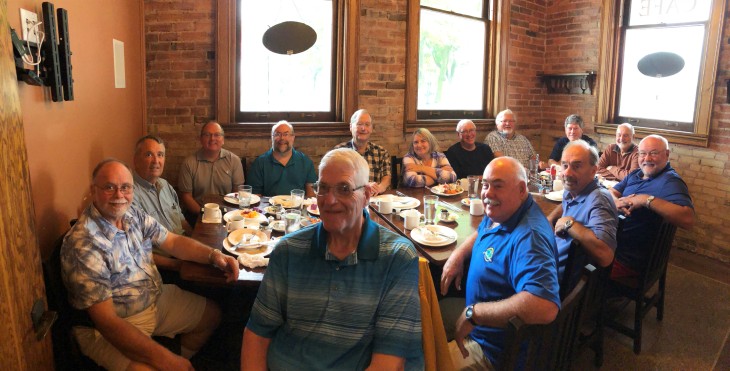 I’m guessing the gender ratio would be similar in any state, if you got retired school band teachers together.  Kind of looks like Congress did, in the 1970s, when I started teaching. Or graduation day at any law, engineering or medical school, back then. A man’s, man’s, etc. world.

I have a large collection of stories around being the only alto in a room full of tenors and basses, year after year. Some of them are funny (like my very first regional band directors’ association meeting, where I was offered the position of Secretary five minutes after introducing myself—and I took it). Some are terrible, heart-rending memories of being belittled, underestimated and ignored. Or worse.

The funny thing is, I didn’t set out to be a pioneer.

I wanted to teach instrumental music, for two simple reasons. One, playing music was my greatest joy in life. Nothing moved me and fulfilled me more than the challenge and the glory that came from making beautiful music.  That may sound like rhetorical overkill, but it’s true. I got hooked on gorgeous music early in life and wanted to turn it into my life’s work. I wanted to share that joy with kids—make their lives richer and more rewarding.

The second reason I became a band director is because I thought I’d be good at it.  I’d observed many instrumental conductors at all levels, played in lots of groups other than my school band—and knew something about what motivated me as a student musician. I had already worked hard to successfully master an instrument and was confident that I could learn the skills and knowledge necessary to become a school band teacher.

Of course, I knew that most band teachers were men. In fact, I’d never worked with or even met a woman director. My high school band instructor told me that he ‘didn’t believe in lady band directors’ and suggested I pursue elementary music education as a college major. The university I chose (like other universities at the time) did not permit women in the marching band—it took lawsuits to make that happen, around the country. Nobody was encouraging me or mentoring me.

Nevertheless, I persisted. It really wasn’t a dramatic personal quest to break a glass ceiling with my piccolo.  I just wanted to teach band.  It seemed like a fun and rewarding job. For anyone.

I went on job interviews where my fitness and stamina in directing a band were questioned. One principal I interviewed with told me he had no intention of hiring me—he just wanted to meet the girl who thought she could handle his HS band.  When I finally got a job, teaching middle school band, the principal who hired me had been on the job one day.  Maybe he didn’t know the rules about band directors? In any event, once I got a job, I was a band director for 30 years.

I’ve been thinking about this a great deal, as mid-term election outcomes have become clear. You’ve probably seen the photographic comparison of Republican vs. Democratic freshmen in the House of Representatives.  ‘Diversity on Stark Display’ says the headline—and it would be difficult to argue, in a representative democracy, that diversity isn’t the crucial ingredient in a fair and equitable decision-making body—or teaching staff, for that matter.

Senator Debbie Stabenow wrote a piece about how the top four offices on the ballot in Michigan were won by women. Not because they were women. But because they were the best person running for the job. The entire mid-term election was a festival of firsts, on the diversity front—and the outcomes were good.

Numbers, in all jobs and experiences once thought to be (usually white) men’s work, are leveling out. The visible trends are positive. And that—in politics, education and the world of work—is good. I’m grateful to every woman who carved or smoothed the pathway for those who came after her.

That doesn’t mean that subtle, deeply embedded sexism has gone away, though. It hasn’t.

It’s often understated and frequently not recognized by its perpetrators. Men relate differently to other men than they do women, in the workplace (and on line). Sometimes, our buried assumptions drive actions in ways we can’t predict. It’s complicated. I learned to work around bias toward women as band directors, but it never went away.

I’m not just making this up, by the way. There’s research.

Whenever I’ve written a blog about the lopsided gender relationships in education, I get a lot of negative feedback. There is lots of room for growth in the way we value who’s teaching second grade, and who’s writing the laws that govern education, however.

You have to be careful before leveling a charge of sexism. But the fact remains, sometimes the best woman for the job is passed over for someone whose qualifications are being louder and ‘bolder.’