I often remind myself that my grandmother was 30 years old before she got the chance to vote. In my 20s, advocating for the ERA to pass (spoiler alert: it didn’t), I asked my grandmother if she considered herself a suffragette, back in the day. Was she champing at the bit, wondering when women would achieve parity with men?

Not exactly. She was happy to have the vote—and used it faithfully, right up until she died at 103, to vote mainly for Republicans, because her brother was a Republican and advised her to do so. But although she was a remarkably independent and self-sufficient woman, for her times, she was not a banner-waving feminist in her 20s.

My grandmother worked, full-time, after leaving school in the 8th grade, in 1904. She lived with her parents, her older married sister and then alone, throughout her 20s. She bought a car with her savings, before she even knew how to drive, getting one of her other (also Republican) brothers to teach her. She didn’t marry until 33, after everyone had given up on her prospects. She was an old maid–until she eloped to Chicago with a 40-something cigar maker.

She was, however, civic-minded, participating in troop support during WW I, reading a daily newspaper and contributing to many charitable causes. She supported herself and her only daughter throughout the worst of the Depression, working at a grocery store after her husband died. She was never anywhere close to well-off, and her grandchildren made fun of her string-saving and vegetable-scrap soup-making. The family joke was that she put one chocolate chip in each cookie.

I think my deep love and respect for my grandma’s persistence in getting on with her life, no matter what, has something to do with my thing for Elizabeth Warren. I remember the big digital display at the Democratic Convention in 2016, when Hillary Clinton ‘cracked the glass ceiling,’ thinking that it was one thing to have finally nominated a woman. But another to actually get her elected.

I liked Clinton well enough (although I voted for Bernie in the primary), seeing her as the best-prepared candidate in American history.  But I did not identify with her or find her story compelling. She was the cool, confident girl at the top of the class who didn’t make mistakes. She was calculating, and shrewd. In retrospect, those are excellent qualities in a president—and I’d give up a lot to have her in the White House now. Perhaps her role in history is to have cracked the ceiling so others can take the escalator, although I’m certain that’s not what she was aiming for.

Elizabeth Warren, on the other hand, is relatable. For me, anyway. Her family was undeniably working class, prone to working-class prejudices (her mother’s ethnic background, for example), and frequently broke. Her brothers all joined the military, a common career plan for the guys who graduated from my blue-collar high school in the sixties. She dropped out of college at 19 to marry, then quickly regretted it and figured out how to get that degree, after all. She went to law school as a young mother. Whatever notoriety and accomplishments Elizabeth Warren has earned, they all belong squarely to her.

But–is relatable a valuable trait? How do we pick a candidate for president?  David Leonhardt has some good advice on that, in the NY Times today:

First, think for yourself. Don’t try to figure out what kind of candidate some other hypothetical voter — a swing voter, say — is likely to want. Think about which candidate excites you.

The strongest presidential candidates usually are more than the sum of their demographic traits and résumé lines. In the 2016 primaries, Donald Trump sure didn’t seem like the most electable Republican candidate — but he won. In 2008, a first-term African-American senator with the middle name Hussein didn’t seem like the most electable Democrat — but he won. If you find someone who legitimately excites you this year, there’s a very good chance that candidate will also excite other voters.

Leonhardt’s second piece of advice:  The Democrats should choose a candidate who understands the appeal of economic populism right now.

Aside from climate change, I think the rapidly expanding gap between the haves and the have-nots is the most critical issue in the United States today. It undergirds other major issues—racism, health care, education, housing and infrastructure, the well-being of the citizenry. And there’s nobody running for POTUS who understands better just how much—and in what ways– the middle class, working class and those in genuine poverty have been screwed by our economic policies and growing inequity than Elizabeth Warren. It’s her life’s work.

I remember clearly the first time I saw Elizabeth Warren on the Daily Show with Jon Stewart.  It was in 2009. She was clearly nervous—she says she threw up backstage—and very much the rattle-on, didactic professor. I learned, from her few minutes on TV, just who was responsible for the financial collapse that had negated my puny investments, and which Wall Street lawyers had been put in charge of ‘fixing’ the economy. She was blunt and bold. She ought to run for Congress, I thought.

I read her book, and was impressed. And I started following her career, beginning with her brainchild, the Consumer Financial Protection Bureau and its struggle to get established, with Obama ultimately deciding she wouldn’t have enough ‘support’ to be its first Director. She’s been speaking out for working families and populist economic values for a decade now, proposing solutions and identifying roadblocks to equity. She’s also routinely been underestimated.

Warren’s enormously popular in her own state. She even called out Hillary Clinton’s two-faced senatorial voting record on financial issues—a pretty gutsy thing to do. Later, once Clinton won the nomination, she supported her—as a team player, another role that winning politicians are compelled to play in a highly partisan system like ours. And now—she’s supporting the Green New Deal, working cooperatively with some of the most progressive new politicians in Washington.

So—just what is it that is preventing right-thinking Americans for backing Warren’s candidacy for President? Maybe it’s the fact that only 52% of Americans say they would feel comfortable with a woman president.  In Atlantic Monthly, Peter Beinart, after dissecting Warren’s flirtation with identifying her genetic heritage and her policy views, says this:

All this ignores the harsh truth that when women politicians—especially women politicians who embrace a feminist agenda—overtly seek power, many American men, and some American women, react with “moral outrage.” They may not express that outrage in explicitly gendered terms, just as they may not express their anxiety about a black candidate in explicitly racial terms. They may instead cite DNA testing or hidden emails or San Francisco’s cultural liberalism. Or they may simply say they find the candidate’s mannerisms off-putting. The media’s role is to dig deeper: to interpret these specific discomforts in light of the deeper discomfort that Americans again and again express with ambitious women.

The media, and those who don’t do that deeper digging can always find a reason here or there to pillory a candidate like Warren—something she said about charter schools 20 years ago, a discomfort with her earnest, opposite-of-aloof personality, or nailing her for challenging Trump’s disparaging label of ‘Pocahontas.’

I fully understand Tribal leaders’ irate clarification: being Native American is not a matter of DNA testing, but cultural identification. But I also understood Warren’s urge to tell her family story. Cross-cultural mixing is the story of America—and as recently as a generation or two ago, many a family’s unity was destroyed by prejudice and intolerance against those with different skin color, religion, ethnic background or class. Although it may have backfired, I thought it was Warren’s story to tell, her grievance to address. And, in the end, not really a big enough deal to knock her off the list of prospective national leaders.

After the 2016 election, I volunteered to go on a ‘listening tour’ for my county’s Democratic party. I went with a partner, and we knocked on doors of voters who were identified as independents and those who did not vote in the previous November. We asked what their most important local, state and national issues were—and what qualities their ideal candidates would have. It was fascinating.

We only found person who admitted to voting for Trump, here in a state that pushed him over the edge. Instead, people talked about how much they disliked Hillary Clinton, going all the way back to her tenure as First Lady, where she was ‘pushy’ and Not Elected President. Yeah, she was broadly experienced and smart, blah-blah—but they just did not like her. They couldn’t relate to her. Plus, they said, she was a liar. Many of them proudly told us (strangers, remember, who knocked on their door, and asked completely different questions) they didn’t vote for anybody as President.

All of this makes convinces me that we need to change the way we talk about women in politics:

For the last two years, women have been standing up. We marched. We phone-banked. We canvassed. We fund-raised. And most importantly, we spoke up. We said, “Me too!”  We said, “I’ll run!” We said, “Enough!” And finally, we had an outcome that wasn’t soul-crushing. After two years of suffering through a relationship with our abusive country and thinking nothing was going to change, we had a reason to celebrate instead of mourn.

So naturally, the internet could not let it stand.

Amen. It’s time to look as seriously at women running for President as we do men. To see their gaffes as just that: gaffes. To investigate their background experiences, expertise and deeply held principles. To stop trying to find that one disqualifying incident or irritating characteristic. To see them as genuine leaders and professionals, with warts and strengths. If there’s anything that 2016 taught us, it’s that Americans have a tolerance for obvious warts, if they see something else they like.

My grandmother never raised a ruckus about not being able to vote because it never occurred to her that her gender had been systematically suppressed. Things just were as they were—men made political decisions and women fried eggs.  Change, like a woman in the White House—let alone a woman who genuinely came from blue-collar roots—would have been unthinkable. In 1920, Grandma was just happy to get the vote.

But a whole century has passed. It’s time for someone like Elizabeth Warren to be President. There are others—in fact, Warren is only one of my top five candidates. But all of them bring something new and energizing to the table. Let’s make change in 2020. 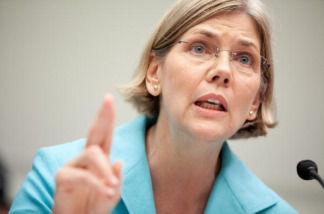