The New York Times published a story this weekend about an amazing research-based discovery: a way to fix boring high schools. The writers (Jal Mehta, who teaches at Harvard, and Sarah Fine, who works at High Tech High in San Diego) spent six years traveling the country, visiting 30 public schools, looking for a cure for boredom, since only about a third of students report feeling engaged in high school.

They assumed that kids were bored because the work was too conventional and easy—and that ‘innovative’ high schools and more rigorous core classes were the solution. But no. It turned out that the answer was curriculum and instructional strategies more like ‘electives, clubs and extra-curriculars.’

In essence, two different logics reign in the same buildings. Before the final bell, we treat students as passive recipients of knowledge whose interests and identities matter little. After the final bell — in newspaper, debate, theater, athletics and more — we treat students as people who learn by doing, people who can teach as well as learn, and people whose passions and ideas are worth cultivating. It should come as no surprise that when we asked students to reflect on their high school experiences, it was most often experiences like theater and debate that they cited as having influenced them in profound ways.

Well. Speaking as a former instrumental and vocal music teacher, my first question is: It took six years and 30 schools (and, undoubtedly, a hefty grant) to figure that out?

I have a few additional questions and observations:

So what’s to blame for this epidemic of boredom? Here’s what the authors say:

SO disappointing. There is plenty of reason to re-think curriculum and instruction for high school students. But please—let’s not blame teachers and schools for failings based on boneheaded policy written by people who don’t respect the deep caring and relationship-building essential for student engagement.

Many teachers and school leaders get great results in spite of large classes and student loads, 48-minute periods, college anxieties, testing overload and whacky teacher evaluation models. Because they’re skilled and experienced enough to go around all the policy barriers to meeting the kids where they are– then teaching them something they find valuable.

The authors finish with one of those ‘we need to’ sections, wherein we get rid of the batch processing, mile-wide-inch-deep curricula etc. and the future is rosy. If they really wanted to be helpful, however, they would go after state legislatures and federal accountability policies, as well as for-profit curriculum publishers and test-makers. Not the weary foot soldiers trying to do the right thing for teenagers.

They might even consider challenging the Talking Ed-Heads at their own and other elite universities, who put out pieces like this one—Don’t Give Up on Curriculum Reform Just Yet—in which yet another Harvard-based researcher blames the failure of more rigorous curriculum to yield better test results on teachers who aren’t smart enough to interpret more ‘complicated’ curriculum.

Somebody is paying these folks to study these things. Why don’t they just ask teachers? 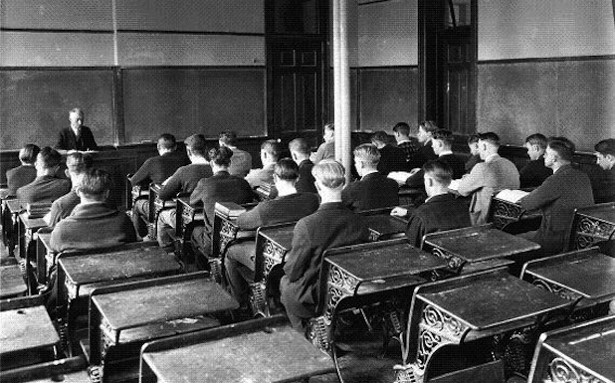