For 20 years, I lived in a subdivision in the heart of the school district where I was teaching. Halloween was a big deal—we’d get a couple hundred trick-or-treaters if the weather was nice. Many of them were my middle school students, or former students, now in high school. I bought a lot of candy. The good stuff.

I’d put speakers in an open window, and a spooky music playlist on my iPod (remember iPods?)—pieces that were part of my annual spooky-music lesson plan. The kid who asked ‘Is that Night on Bald Mountain?’ would get an extra piece of candy. And the boys who came for candy, left and switched costumes on the street, then came back—twice—got another piece both times and props for ingenuity.

I would dress up. This was easy—same costume every year—because my 8th grade students performed a Halloween-themed concert, and I was always the Wicked Witch of the Band Room.  It’s a perfect time of year for students with two years’ worth of playing experience to prepare a fun program, stretching their musical skills and knowledge. 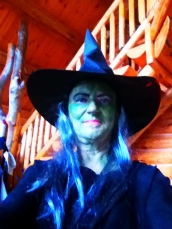 The students dressed in costumes. This was a hard sell for some of them, but they were assured that ‘costume’ could mean something very simple—perennially, there were boys in shoulder pads and football jersey, toting their euphoniums into the gym to play Danse Macabre.

My principals, over the decade we did this concert, were supportive—all school leaders love events that bring hundreds of happy parents into the building, especially when small children are welcome.

One principal was open to all students dressing in non-violent costumes when October 31 was a school day. This did not go down well with a subset of the faculty, who felt middle schoolers were too old for such nonsense and that costumes would be a major distraction to learning.

Are your students typically focused and quiet on Halloween? she asked. Well, no. So let’s let them be kids a little longer. Endorse a little good, clean fun in a safe space.

She was right. Halloween, once a neighborhood-based candy grab for little tots, has turned into a major commercial boondoggle with pop-up stores, sexy whatever costumes and a lot of serial-zombie blood and gore.

Telling seventh graders that they’re too old for all the fun and have to stay in the house and do their math homework isn’t likely to change their minds about anything. And just try to keep your HS sophomore home if their friends are out creating minor-league mayhem. Better they should be in their own neighborhoods, toting pillowcases full of loot, or at parties where there’s a parent upstairs.

So how old is too old?

Chesapeake, Virginia says 13 is the age when trick-or-treaters should be fined or sent to jail, for up to six months. No, really. And if you’re out at 8:05 p.m., it’s a misdemeanor.

I don’t know who made up these rules in Chesapeake, but good luck enforcing them.

And pass me another fun-sized Snickers.