If there ever was a time when top-notch media analysis skills were crucial for American citizens, the past two weeks were the motherlode of opportunities to sort out manipulated messaging from simple truth.

Dig into that statement a bit. Is it possible to make students better consumers, curators and adjudicators of the digital/media information firehose? Or have schools dumbed down curriculum and academic demands, leading to a heedless citizenry, amusing itself to death? (I didn’t come up with that phrase, BTW—Neil Postman did, long before Facebook, Twitter and Celebrity Apprentice, when cable news was the most dangerous thing on TV.)

The phrase ‘dumbing down’ (or—worse—’dummying down,’ putting emphasis on students’ reputedly flabby brains) has always been anathema to me. I have never—in 40 years of working in classrooms—observed a serious curricular trend toward making things less complex or challenging. In fact, since I started teaching, in the early 1970s, there has been a steady upward push toward what reformy types might call rigor.

States have adopted ‘merit’ curricula, demanding four years of HS math and other course sequences that used to be reserved for the college bound. All public-school students in the nation submit to high-stakes standardized tests annually, beginning when they’re barely eight years old. Seventh graders solve single-variable equations that used be the stuff of ninth grade Algebra. The phrase ‘kindergarten is the new first grade’ is now conventional wisdom in early childhood pedagogy.

Not seeing the dummy-down phenomenon here, except in op-eds by irate business leaders who claim they can’t find the skilled workers they need.

And, of course, some of our Congressional representatives who seemed unable to form rational questions or evaluate and respond to answers when grilling the brave civil servants who sat in front of them last week. Watching and listening, it was easy, over time, to see the obvious chasm between ‘just the facts’ (under oath) and ‘spin, baby, spin’ (not under oath). I kept asking myself: Who is impressed by the shouting, off-topic rants and left-field accusations?

Heather Cox Richardson answered:  Using my eye for propaganda techniques, they reminded me of nothing so much as being a talking head on a documentary. When producers are filming you in that situation, they very carefully ask questions to get a sound bite they can use. It seemed very clear to me that Jordan and Ratcliffe, and especially Nunes, were tangling the witnesses in questions designed to give the questioners short sound bites that they could then make into their own “documentaries.” They were salting the hearings with the language of conspiracies that people who don’t watch Fox cannot understand but which, in their sound bites, can be turned into a narrative that will misrepresent what was said and proven today, marketing it to True Believers who will then continue to support Trump and his party.

And then, as soon as they got their sound bites they would get up and leave.

What I was wondering: Can this ‘eye for propaganda’ be taught? Is it important that our students learn more than facts, timelines and skills? Can they be taught to assess value and truth in all their studies (and I don’t mean just their History, Civics and Government courses)?

Or will they be ripe targets for ‘contagious stories’—simple, emotionally self-validating explanations for current events and issues? Can flagrant lying be ignored or tolerated to maintain the peace, preserve the Republic? We are approaching ‘Germany in the 1930s’ territory here.

Stephen Sawchuk had a provocative piece with a great headline in Education Week: Students Are Really, Really Bad at Spotting Fake News, Misleading Websites. I don’t think it’s only students who are really, really bad—I think it’s the general population, distracted and trying to keep their heads above water, who are finding it hard to get at the truth. It’s all about where you get your news. There is, Sawchuk says:

…alarming evidence that a large majority of students are not well prepared to investigate sources of information for their accuracy, relevance, and quality. And despite more than a decade’s worth of policy chatter about media literacy, whatever schools have been doing doesn’t appear to have been enough to inoculate students against “fake” news.

It’s doubly concerning given that there are now entire cable-news networks and partisan news sites built around presenting a skewed accounting of facts. Social media hasn’t helped: The atomized nature of online interactions makes it easy to share doctored or fake information. And increasingly, as another recent report coined it, “truth decay” is eroding the notion of objective facts: Americans can’t even agree on a set of basic facts that underpin their arguments or conclusions anymore.

Sawchuk gets this exactly right. I can’t think of a single thing more important, or relevant, in a liberal arts curriculum, K-12, than an investigation of the veracity of news sources. Or teaching kids how, Step One, to be deeply suspicious of pretty much anything that crosses their tiny screens.

It’s not just about sorting out the truthful, centrist sources, and identifying bias in sources. It’s about demonstrating how vulnerable we all are to stories that ring our emotional chimes. Especially kids.

Let me say that again: especially our students. We should be talking about this in schools.

Or else we’re going to end up with more captions like this— In rollicking 53-minute conversation, Trump embraces conspiracies, spreads falsehoods and insults opponents—that make it sound like conspiracies, falsehoods and insults were somehow ‘rollicking’ (‘exuberantly lively; amusing’). I know better than to assign blame to the writer—headlines are added later and play by different rules.

But really. Isn’t it time we stopped laughing?

Can schools nurture civic engagement? I think so. 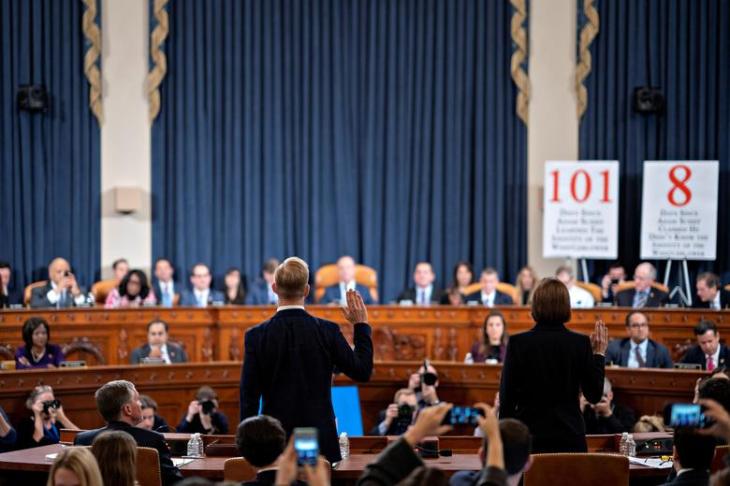