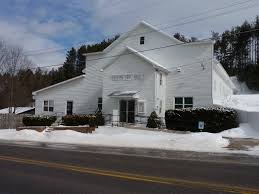 Actually—it’s one of those little tri-fold plastic visual shields, set in front of an uncomfortable metal folding chair, in the Solon Township Hall, a white clapboard building just as quaint and folksy as you might imagine a northern Michigan polling place to be. But what happens there is powerful and predictive. This is, as the saying goes, what democracy looks like, here in Leelanau County.

In August, before the Primary, I did something I’ve not done before: I told my Facebook community who I planned to vote for, in the gubernatorial race, and why. I did not expect a conversation—perhaps a few upward thumbs– but a long and rich thread bubbled up, including two or three commenters who found my logic ‘disappointing’ or worse.

It was the antithesis of a word we’re hearing a lot lately: tribal, left vs. right. In fact, it was a kind of state-wide town hall-ish discussion where my friends and acquaintances put forth diverse viewpoints, in real time, on what this state needs. Even the people who thought I was making the wrong—WRONG!! Angry Face! —choice had rational, if heated, things to say.

And a couple weeks after the primary, while at breakfast, a friend whose transparent values and good intentions are her trademark told me she had changed her mind, after reading the discussion. On my Facebook page. I felt ridiculously proud. Not because she’d embraced the same candidate as me—but because people had come to my virtual home to seriously talk politics. Democracy.

I will not be voting until November 6th. I am eligible, as a <cough> senior citizen, to vote absentee in Michigan, but for many reasons, I like to push my own ballot through the machine. I’ll be working as an election challenger, too.

I’m voting for Democrats, mainly. This isn’t always the case; years ago, I routinely voted in the Republican primary, because I lived in such a red county that the primary was the only place I had any discretionary power over who would be making the laws I had to live by. There have been other reasons to split my ticket.

Still, this is a year to tip the scales in favor of the good-guy party, seeing as how Republicans across the country are currently providing a garish, sickening illustration of feckless and corrupt conduct. Go blue, no matter what. More interesting to me than the candidates this year are the statewide proposals. There are three, and it is my fond (and probably unrealistic) hope that social studies teachers all over Michigan are discussing them in class. In reverse order:

Proposal Three is the easy one. In fact, it’s a no-brainer. It’s a proposal that makes voting easier and brings MI in line with most other states: early voting, automatic registration, straight-ticket voting to shorten lines, more reasons and flexibility around absentee voting. It’s the ultimate tidying-up of outdated, anti-democratic voting practice in the Mitten State.  Anyone who took Civics in high school ought to vote YES.

Proposal Two is the anti-gerrymandering proposal. It’s drawn a lot more attention than Prop Three—in fact, anti-Prop Two ads were just pulled from a couple dozen radio stations after an emergency court filing proved they were flat-out lies. The Republicans are terrified of this one; Michigan is one of the most heavily gerrymandered states, through a series of backroom efforts designed to disenfranchise people of color and left-leaning communities.  Michiganders vote blue in every election, overall, but end up with more red representation. That’s wrong.

Am I convinced that the plan Voters Not Politicians (who sponsored this proposal) came up with is perfect? Not at all. I attended early VNP meetings where various gerrymander-busting tactics—going through the courts, for example—were examined.

I came away understanding that there is no foolproof or cheap way to get rid of the scourge of the party in power picking their voters. I fully expect there will be hiccups, even battles, along the way. But something needs to be done. I’m sick of political parties—both of them– using inequitable and unfair means to hoard power. It’s also wrong. YES on Two.

Proposal One is about regulating the recreational use of marijuana. I’m voting YES.

This might be surprising to some of my fellow educators who worry about making it easier for students to access pot. I want to stress that I’ve been worried about schoolkids and harmful drug use for forty years. I actually think regulating marijuana, limiting sales of a state-controlled product to those who are 21, and giving the police clear guardrails about prosecuting sales and use, are good things.

My reasons echo those of Carol Siemon, a Lansing prosecutor who wrote a powerful op-ed on why Proposal One is a good idea:

“All too often, young adults and persons of color were swept up in the dragnet of drug enforcement and the “tough on crime mentality.” Today, data supports that the arrest rate of African American males is 3.3 higher than the arrest rate for white males for possession of marijuana.

Marijuana prohibition hasn’t worked and continuing to enforce this failed law is an exercise in futility. The cost is too high in so many ways. It’s time to draw this industry out of the black market, regulate and tax it, and free up law enforcement resources to concentrate on serious issues that truly impact our state’s quality of life — issues like the opioid epidemic, guns, domestic violence, and other violent crime.”
Remember, Carol Siemon is a respected county prosecutor, not a potential merchant or regular user. She looked at police data on teen drug use and driving safety from Colorado and Washington and finds that threats about an increase in accidents are unsubstantiated.

You might think I’m excited about the tax ‘windfall,’ a third of which is promised to schools. Michigan is not taxing marijuana as heavily as Colorado and Washington, so the word is more like ‘trickle’ than windfall.  I am also skeptical about any promises to help fund schools through set-aside taxes. We’ve been down that road before. Many times. There are dozens of shell games the legislature can play when funding schools. What we need is education-friendly legislators, something we can also address on November 6th.

Besides, schools should not have to depend on the marijuana market to get new tools and materials.

That’s what I think. How about you?